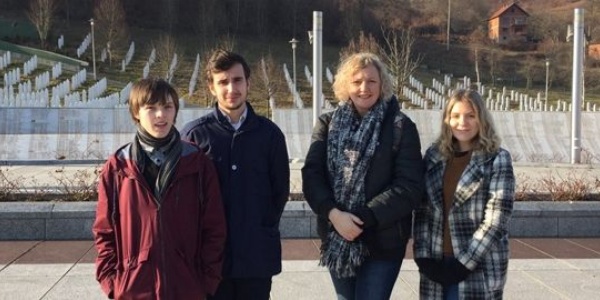 Sixth form students from Huxlow Science College joined their peers from three other schools to travel to Bosnia during February half term 2017, on a pioneering programme that will inspire them to evoke change in their own communities by learning from the past. The four-day visit to Bosnia is part of the year-long Future Leaders programme with the charity Remembering Srebrenica, which aims to educate young people about the Srebrenica genocide and the consequences of hatred. The students attend workshops before and after the visit to equip them with the knowledge and confidence to share what they have learned with their schools and wider communities. The post-visit briefing in March will offer students the opportunity to reflect on the visit and plan their pledges, which will be carried out during Srebrenica Memorial Week in July.

The genocide in Srebrenica happened 22 years ago, when General Ratko Mladić and his Bosnian Serb forces marched into the town of Srebrenica and systematically murdered 8372 Bosnian Muslim men and boys. During their visit, the students met survivors of the genocide and relatives of the victims, as well as the International Commission on Missing Persons which has spearheaded the effort to locate and identify the 40,000 people who went missing during the conflicts in former Yugoslavia.

Remembering Srebrenica works to honour and remember the victims and survivors of the genocide. They organise the UK Srebrenica Memorial Day on 11 July each year and the 8-3-7-2 memorial schools football tournament as well as the Future Leaders programme.

Rebecca Heron, Education Manager for Remembering Srebrenica said “Visiting Bosnia and hearing from survivors of the genocide is a moving but vital experience and we know from experience the impact it has. We have taken nearly a thousand people on the Lessons from Srebrenica programme over the last three years and these have all returned to become Community Champions, promoting safer, stronger and more cohesive communities in the UK.

“We are looking to build long-term relationships with these young people and work with them, not just throughout the year, but also to follow their progress after they leave school, either through university or into future careers, to support them in their role as future leaders against hatred and intolerance.”