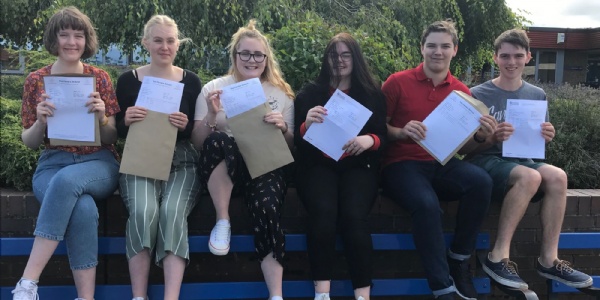 Sixth form students from the East Northamptonshire schools of Ferrers, Huxlow and Rushden assembled today to celebrate their examination successes. The 2019 results mark an uplift in overall A level ‘pass rates’, with 100% pass rate in the vocational Applied (BTEC) courses. Many students achieved stunning results. With the competition for top university places as demanding as ever, TENC was delighted that the majority of students aiming for higher education courses secured their places with a large number at prestigious “Russell Group” institutions including the University of Cambridge.

Particular success went to Indra Warr from The Ferrers School who takes her place to read Natural Sciences at Cambridge University having achieved exceptional A* A* A grades in Chemistry, Biology and Mathematics.

Other notable students were Sinead O’Callaghan, from Huxlow Science College who was also awarded an A* in Chemistry and A A A in Mathematics, Further Mathematics and Physics to secure her place at the University of Nottingham to study Natural Sciences. Alfie Aldridge, also from Huxlow, achieved A A A grades in Biology Chemistry and Mathematics and will study Medicine following a gap year.

Ferrers student Ella Brown was delighted to achieve A A A B in Physics Chemistry Mathematics and Further Mathematics and is going to the University of Nottingham to study Mechanical Engineering.

Rhys Spavins Hicks from Rushden Academy achieved A* in Mathematics A in Chemistry B in Further Mathematics and B in Geography. He plans to study Chemistry at Cardiff University.

Elaine Brooker, Director of The East Northamptonshire College, offered huge congratulations to all the students and staff across TENC who have worked so hard to achieve these results and also thanked parents for their support over the last two years. “We send very best wishes to all our Year 13 leavers as they embark on the next stage of their lives and their chosen careers”

Our next Sixth Form Open Evening will be on 10th October 2019, held at The Ferrers School.